« Even as they recognize the severity of Huntington’s, Solhdju and Rivières reject the tragedy narrative and eugenic assumptions that run through much of the discourse on this illness. They ask instead, how can we live better with such a disease? How can we use Huntington’s as an opportunity to push thinking further?' » Alice Wexler. 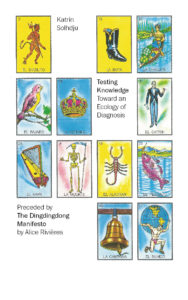 Testing Knowledge: Toward an Ecology of Diagnosis, Preceded by the Dingdingdong Manifesto is now available.

This volume edited by Punctum Books presents the collective adventure of Dingdingdong, the Institute for the Co-production of Knowledge about Huntington’s Disease, founded in 2012 between Paris and Brussels, in English for the first time.

Katrin Solhdju’s Testing Knowledge: Toward an Ecology of Diagnosis 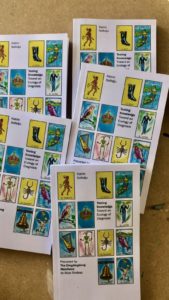 Testing Knowledge: Toward an Ecology of Diagnosis, Preceded by the Dingdingdong Manifesto: Punctum books, 2021. 194 pages

Katrin Solhdju’s Testing Knowledge: Toward an Ecology of Diagnosis (Dingdingdong, 2015) pursues the question of taming the violence of the new species of medical foreknowledge represented by genetic testing. Adopting historical and epistemological perspectives on diagnostic situations, including observations from anthropological field research, speculative storytelling, and ancient oracles, Testing Knowledge proposes a new ecology of predictive diagnostic gestures, which potentially concern us all.

The Dingdingdong collective’s Manifesto (Dingdingdong, 2013) tells the story of the young Alice Rivières, who in 2006 took the presymptomatic, genetic test, foretelling her that she will eventually develop Huntington’s. Her first-person account of the revelation of her test results, which she experienced as an act of poisoning or cursing, pulls the reader into the manifold ethical, psychological, and existential issues inherent to medical predictions.

Foreword by Alice Wexler and Afterword by Isabelle Stengers

Published by Punctum Books, in the 3Ecologies collection

Punctum books, originally founded in Brooklyn, New York in 2011, and with editorial offices in Santa Barbara (USA) and The Hague (Netherlands), is an open-access publisher dedicated to radically creative modes of intellectual inquiry and writing across a whimsical para-humanities assemblage. The 3Ecologies collection is directed by canadian philosophers Erin Manning and Brian Massumi, and aim at prolonging the wonder sustaining philosophic thought into transdisciplinary encounters. Its premise is that concepts are for the enacting: they must be experienced. Thought is lived, else it expires. It is most intensely lived at the crossroads of practices, and in the in-between of individuals and their singular endeavors: enlivened in the weave of a relational fabric. Co-composition conceptual, social and environmental

The book is available as open access e-book and print. 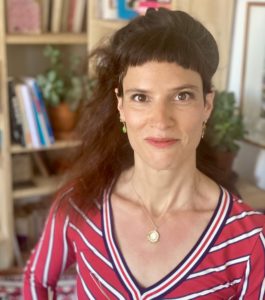 Katrin Solhdju is a cultural studies scholar and FNRS research professor in the department of Sociology and Anthropology at the University of Mons in Belgium. Her research approaches are inspired by the Science and Technology Studies, pragmatist philosophy, and speculative thought while her objects rather coincide with the field of the Medical Humanities. She is one of the co-founders of the collective Dingdingdong, the Institute for the co-production of knowledge about Huntington’s Disease, member of the Belgian Advisory Committee on Bioethics and of the Groupe d’études constructivistes at the Free University of Brussels. Next to a large number of articles some of her book-publications are: Selbstexperimente: Die Suche nach der Innenperspektive und ihre epistemologischen Folgen (Verlag Wilhelm Fink, 2011), Faire art comme on fait société: Les Nouveaux commanditaires (co-ed., presses du réel, 2013), and L’Épreuve du savoir: Propositions pour une écologie du diagnostic (Dingdingdong, 2015). 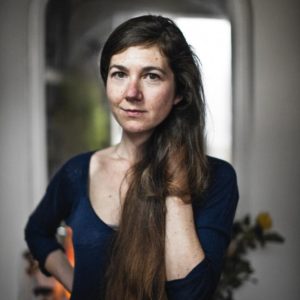 Alice Rivières is a carrier for the genetic mutation for Huntington’s Disease, a rare, genetic, neuroevolutionary disease which has slowly transformed her: body and soul. Ever since she learned about her extra-ordinary becoming, she dedicates most of her time to observing and writing about what she calls her “long walk of neuroevolutionary metamorphosis.” Living in Paris and Brussels, she is Dingdingdong’s special delegate to Huntingtonland. She is the author of Le Manifeste de Dingdingdong (Editions Dingdingdong, 2013), Anouck, portrait dingdingdong n°1 (with A. Compain-Tissier, Editions Dingdingdong, 2013), as well as of dozens of notes on www.dingdingdong.org.

Alice Wexler is an independent historian, secretary of the Board of Directors of the Hereditary Disease Foundation, and a Research Scholar affiliated with the Center for the Study of Women at UCLA. She is the author of The Woman who Walked into the Sea: Huntington’s and the Making of a Genetic Disease (Yale University Press, 2008) and Mapping Fate: A Memoir of Family, Risk, and Genetic Research (University of California Press, 1995). She is part of the Journal of Huntington’s Disease’s editorial committee. She lives in Los Angeles.

Isabelle Stengers (BE) is a philosopher of science who taught philosophy at the Université Libre de Bruxelles. Her oeuvre centers around both the constructive adventure of the modern sciences and the problems born from the association of this adventure with power and claims to rational authority. Among her books available in English : Order out of Chaos (with I. Prigogine); The Invention of Modern Science; A History of Chemistry (with B. Bernadette Bensaude-Vincent); Power and Invention; In Catastrophic Times: Resisting the Coming Barbarism.